I should have written this yesterday but alas, I got busy and just didn’t do it. I am still selling crocheted animals and dolls if anyone wants one. On with the gossip of McDonald’s located at 503 North Lincoln Road in Escanaba, Michigan!

Everyone has rumors but I asked the workers changing McDonald’s and the staff of McDonald’s, what the hell is going on? I was there twice before and well, I am a nosy person, so I have known since around the middle of February that the playland was going bye-bye. I got to hear the Wilson’s talking to the architect about the designs and I got to see the designs the day before they took out playland. Now most will tell you it is coming out because of maintenance and insurance or liability. Just not so. Our McDonald’s has decided to follow the corporate rebranding of McDonald’s. This is the reason. Nothing to do with extra seating or playland but with the corporation itself. The new “modern” McDonald’s is trying to compete with Starbucks! Therefore, all the franchises are expected to follow corporate’s lead and ideas.

They are squaring up the outside of the building and remodeling the whole inside. They will have the lobby closed for about 1 day but no one knows exactly when. THAT IS RIGHT FOLKS THE WHOLE STORE IS GETTING A FACELIFT! The lobby is getting more plugs and the new design. If you have been to Green Bay’s McDonald’s then you will know what it should look like. They are leaving in the corner booths but expect all chairs and tables.

McDonald’s Corporation has been rolling out new designs like the ordering menus inside the lobby which means you don’t have a cashier, having someone bring  your meal to the table, and being more of a coffee shop with WiFi access.  McDonald’s is fading itself from the image of fast food and families to being a coffee shop that serves food giving people access to the internet.

I talked to the kids that came in and they all hate the new McDonald’s. They want their play area back. They no longer want anything to do with this place. What is most upsetting is that the play equipment went into the garbage. Everyone believes it should have been donated to a place, any place, where kids can still use it. Several parents have said they won’t be coming back and that includes grandparents as well. It was the sole reason to be at our local McDonald’s. It was the place to go with small children. It kept them wore out and on good behavior since they could play a while and eat. Even the elderly where asking the staff of McDonald’s where the kids were going to go now. We have really bad winters. This means finding an indoor place for the children to play. There is now a huge, HUGE gap in our town that needs replacing. It is nice that corporate wants to compete with Starbucks but at what cost. They are now alienating the families who really were the backbone of McDonald’s. McDonald’s would never have served millions of people with out the children begging to go there.

I have some more pictures for you all and when the remodel is complete, I will get you more. I am not sure what to think of McDonald’s new way of being. I guess we all grow up at some point in time. McDonald’s has been sued over and over again because of the menu maybe they think it is time to say goodbye to the food and hello to the coffee driven society of people. 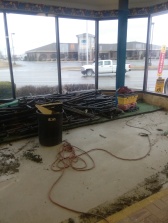 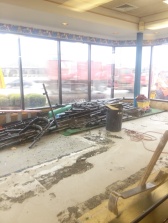 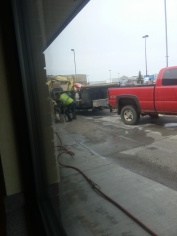 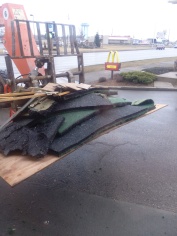 I just wanted you all to know it has nothing to do with liability, insurance, or maintenance of playland but in the new rebranding of the McDonald’s image.  I will write you all again real soon. Until then, enjoy your coffee and net surfing at a McDonald’s near you!

Escanaba’s McDonald’s located at 503 North Lincoln Road is getting what they call a facelift. They are tearing out the playland area today as it rains upon the town. Even the weather is upset that McDonald’s won’t have a play area for the kiddos anymore. They are wanting more sitting room but have forgotten the only reason they need the sitting room is for the parents who have small children whose only reason for going to McDonald’s is the play area. It is a sad reality for many today as we watch the workers hauling the play equipment off to the garbage. I feel really bad for all the kids. It is a sad, sad day.

I did find some uplifting news for you all on Facebook. It is mainly cat related except for the bear. What great news for this bear cub. I wish more people had compassion for other beings on this planet.

10 Healthiest ‘People Foods’ You Should Be Feeding Your Cat

The Cat Handshake: How To Introduce Yourself To A New Cat

I still love watching The Simpson’s and I remember watching the Tracy Ullman show just to catch the latest episode of this zany family. It has been 30 years of watching the same family cartoon!

The Simpson Family Made Its Television Debut 30 Years Ago

Some sad news in today and this is the stuff I usually stick on tumblr for conspiracies. There are political articles here too. Nice that Trump gave his salary to the Park Service! Never seen a President do that before. Another first from President Trump that I have never seen in my lifetime. Although, I still say down with Betsy but that is a Michigan thing. Some hate her here and others love her but to me, she knows nothing about education and is not qualified to do this job.

More news later folks. I will write to you all again soon. Have a marvelous day!

I finished Foxy except for the tail. I want to get some of that special yarn that will make it look more fluffy like a fox tail should. But he is finished! I found I didn’t need the pipe cleaner even though I used it. I could have just made a straight circle and put a couple of stitches in to bend it like a hook. Nice to know since everyone makes a candy cane with a pipe cleaner but I figured out a different way! YAY to the ME!

I am super happy that my McDonald’s still has the shamrock mocha. Nice. By the way, they started taking out the play area today. Our McDonald’s is going down hill. I loved the play area as did many parents. It is a great place to take your kids to play and have some grown up time with your pals. The kids are entertained and you get some breathing time to have an adult conversation with actual people instead of a child. I shall get some photos of it for you. I am so disappointed. I am disgusted as well. The play area should always be at a McDonald’s.

I managed to get a bunch of orders done and I am working on some extras for selling. I have a unicorn I have to sew together. I sewed on the eyes and nose instead of using safety eyes. I figure this way, it can’t get into a baby’s throat.

Enjoy the Foxy and Bunny photos. I will get some photos of the unicorns for another post. I still have to check the Facebook Beta app and see what is happening. Been busy today.  I will write again soon!